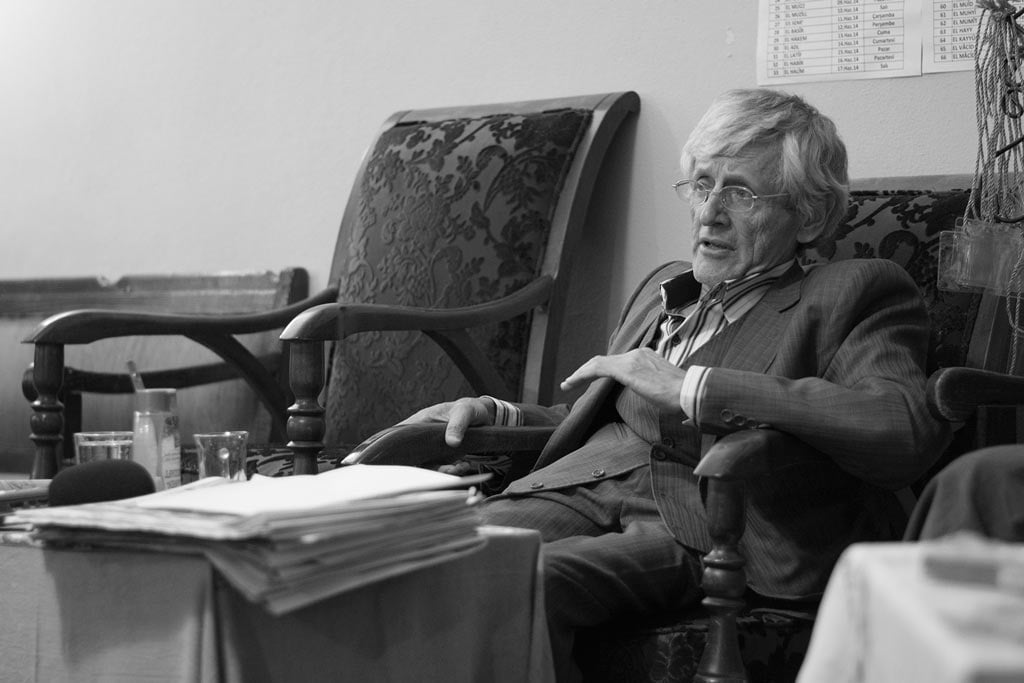 The text below is transcribed from a talk Rahmi Oruç Güvenç gave in Yalova Gökçedere on July 1st, 2017, during the event 114 days and 114 nights sema.

There was Mehmet Dumlu Hoja in Kutahya… When returning from Sufi tour we were visting him at the ceramic shop called jam ceramic. In the shop, down floor he had a place to make sohbet(1). Normally he was an imam in the mosque, also he was a master at a spiritual level. He was doing those things together quite well. We had very beautiful sohbets around the subject Ashk(2), and also the subject of mirror. One of the things he said about love was that, love has this quality of pulling something to itself. When we were speaking to some astrophysicist friends, there was a subject: there is a book called Einstein and the universe. In page 119 line 17 there was an information, I wish I could keep all the page numbers and lines of other books, but this somehow stayed in my mind, there Einstein talks about vacuum, the power of pulling something. To go to another planet we need a pushing force, that is why they are always working on the subject of fule, hydrogen or other materials. Now they work on this other element Bor, it is very good that they are working on Bor because 70% of resources of this element is in Turkey. There is a good economical possibility. In Turkey for such things they are making space, research center. Maybe there will be a chance to send beings from Turkey to space, Or they will be space for those coming from space, if they come here we have every day different food for them. Our breakfast is quite rich. There is nothing like this chorba (soup) with lentils and erishte(3). Our nice smelling rice. The […] for such elements is quite expensive. But Einstein in his book talks about something else. Each planet has its own kind of pulling force. For example, if we had a machine to control somethings, and if we had a […] that would fly, and we want to go to the Venus, and we measure it according to the pulling force of Venus, op immediately we would go to Venus. But if we can not go, then the gravity in the earth doesn’t let us do this.

Now lets move this to Sufism. For example like, Venus is our lover, to be able to go to this lover then we need to get rid of our ego which is the gravity of earth. A new dervish, went to visit his Sheykh master, knocks on the door, the answer of “who is there” comes from inside, dervish says “I” and the door is not opening. He travels travels, some years pass by, comes back again and knocks on the door, the master says “who is it behind the door?” and the dervish says “You” then the door is opened. Niyazi Misri he says, or it is better we give an example from Amake-Hayal(4):

“I am the one that when I say “I”, what I mean is your greatness.
I am the one, so from my being we see your unity.”

When I say “I” what I mean is greatness, then the I is actually gone. Generally in the sohbets the Sufis they don’t talk about their own experiences of their own ideas. They give the teaching of their experiences indirectly through the stories of the saints. Because of this it is important to show respect to the stories of the saints, and to find some formulas to live through them. For the friends who were not here…

— Translator: Emre Başaran —
Wen you say I it does not only mean yourself, there are other things. It includes some thoughts, perceptions, applications of that are required by the ego but which are not preferred by Allah. The story I tell you now is a good example of this. It is from Tezkeratul-Evliya by Feriduttin-Attar. There was a man called Hazrate-Nuri, and when he spoke in darkness you could see light coming out of his mouth. It was not written in the book, but probably they made him talk in darkness. One day he was walking, and he came across a fire, a family was trapped in fire, mother and father are outside the house but two children are in the house. The parents are screaming, but they can not go in, and there is no one to help them. Hazrat-i-Nuri when he sees this, he directly goes into the house without any doubt, picks up the children and comes out. The father is very happy and he wants to reward him, and wants to give some money. Hazrat-i-Nuri refused it. He says, if Nuri takes this money he will be no longer able to pick up children from fires. In this very delicate event where is the ego located? It is located in the very back. It is ego’s will to have own and to store, against ego’s will he displays the attitude of sacrifice, help and sharing, even risking his life. This is not easy, but it’s not impossible either. Because the idea of serving Allah and the love of human beings, has a quality far beyond the power of ego.

If a person becomes successful in applying such a way of life sincerely in a daily life, that person is able to use the right-to-choose in this direction, and the most important of all if that person is able to keep the decision and support it till the very end, then that person will be the example of a human being that is able to keep the will power focused on one thing and keep it focused until the end. This is a quite important thing in psychology, the subject of keeping things going. The idea of keeping things going or following what we started is not merely a theory, it should be applied, it should be practical. Because that at the same time is a human value. Because it is a subject of honor. When a promise is made, one should be able to keep it and follow what is required by it until the very end. There maybe some occasions when some acceptable excuses come to surface. These are accepted. When there is no excuses that you are able to keep your promise and follow what is required by it, if you don’t follow it then there is something loose in that subject, in that part… Maybe some other things are interfering.

In the Mevlevi path there are those dervishes who are going to chile(5) for a long process of ritualistic retreat. Sometimes there are some dervishes from those who can take great responsibilities. In that situations they are usually commissioned by duties that require long distance travels. For instance from here to Yalova, 2 hours 2.5 hours walking. That persons sets out on the road. Right after him a few followers go. Those people will do what ever they can to make him turn out of his path. They would invite him to eat food, to drink, tell stories etc… until that person is able to say no to all of these… get busy with the commission he was made. He might say, if I set out to do something I would never risk the duty with following other invitations, but imagine yourself on the road for one hour, the heat is 40 degrees, you are thirsty, tired, the commissioned person who came before us made a nice shade, in the shade he put these watermelons and other fruits, delicious fruits, cherries and nice drinks, and places to sit, and says welcome, you might think that invitation is from Allah. Eyvallah. Until here it’s ok. They sit and conversation starts, where are you coming from, how are the kids and family… and meanwhile the minutes pass. The person who asked the question already knows all about his family. What are your interests? Where did you do your military service? Do you know […] Do you know […]

The subject extends, what happened to the dargah? dargah is on the shelf. Two hours passed, in this two hours he gets loose, feels tired, the person offers, so you are tired please have a seat, sleep here. Then the dervish sleeps. Three more hours pass. The difference of two hours became eight hours. So, where is the contract, where is the loyalty? These are the weak points of the human being. If he becomes the servant of these weaknesses then he looses the party.

Let us measure the millimetric possibilities of this in hour daily lives. We left the university and are going home. We were just chatting with Musa about the shoe making or the shoe shop. There is a shoe shop on the way. And there is a cat in front of the shoe shop, right in front of the door. It did its legs like this, you can not see the feet. This so lovely so beautiful, but we came in hurry, we just got stock there and staring at it. We might ask, is this not normal, is this not ordinary interest of human being? Now let’s look at it not from a microscope but from a telescope. Lets enlarge the cat and the shop, and the interest. Let us imagine we remain the […] what happened? Our focus of attention changed. In the old days, since there were much fewer impulses that would prevent the dervish from the path, it was easier to walk the path. But today as you are walking there are so many shops and points of interest on the way that it is hard to get to where you are going to. So, where is the attraction of Venus? When the obstacles are increased, the possibility of getting to Venus by the attraction decrease. You invent little Venuses, and Venus starts to complain: you were going to come, where are you? Being delayed is only accepted for a little while.

With the mercy we remember the memory of Mehmet Dumlu Hoja, and we would like to repeat the idea that love is an attraction, a vacuum. In the last days we were talking about this ecstasy, and this Vejd the ecstasy is a manifestation of love, Ashk. Let us remember the time that prophet Mohammad did the Sema. What was it that the poet from Nejet was saying? Chare Kendimde: the remedy is in me. But which remedy? It is the remedy that takes me to your love. So I conclude that I might be able to come to you only with the revolution I make in myself. The quality of this revolution, is related to the will power that removes the obstacles from the way.

Now we got back to the point where we started the sohbet. This is Yaybahar Gorkem with this instrument played with big orchestras in the world. The first version we brought here and we listened to it in the tent…

(1) Sohbet: (Sufism) Informative talk given by an experienced, knowledgeable person.

(3) Erishte: Some kind of noodle or fettucini that is typical in Turkish cuisine. Usually home-made.

This site uses Akismet to reduce spam. Learn how your comment data is processed.